Dr. Harris is one of the best gallbladder surgeons in Birmingham.  As a gallbladder specialist he understands how debilitating gallbladder disease can be as he has helped hundreds of patients alleviate their pain through his minimally invasive surgical approach. If you are experiencing gallbladder pain, suffering from gallstones, or want to learn more, schedule a visit via our contact page or by calling (205) 995-9700.

Dr. Harris, a board-certified general surgeon who trained at the Mayo Clinic.  With the exception of extremely complicated cases, he performs all of his gallbladder surgeries laparoscopically with a few small incisions and usually with a minimal amount of post operative pain.  The medical term for the procedure is laparoscopic cholecystectomy.

The Main Benefits of the Laparoscopic Gallbladder Removal Approach Include:

Why Would I Need Gallbladder Gallstone Surgery?

When you eat - especially when you eat fatty food - the gallbladder contracts and pushes bile into the intestines to help with digestion.  Gallstones can block the gallbladder from being able to do this and this can cause pain (called biliary colic).  This can also sometimes cause nausea and vomiting.  Sometimes inflammation can develop as a result of gallstones and cause the gallbladder to become infected.  Gallstones can also get out of the gallbladder and travel down the bile duct and block the bile duct and cause jaundice or pancreatitis.  Very rarely pancreatitis or cholangitis can be life threatening.  Sometimes an endoscopic procedure called an ERCP (endoscopic retrograde cholangiopancreatography) is needed to remove gallstones from the bile duct.  An ERCP is done by a gastroenterologist.

Patients with biliary colic should avoid fatty foods to help control their symptoms but sometimes this does not help very much.  Other patients can deal with their gallstones this way for a long time but most patients get tired of a strict diet or their abdominal pain worsens and they want their gallbladder removed with gallbladder stone surgery.

Can My Gallstones be Removed Without Gallbladder Removal Surgery?

No, this is not an accepted treatment.  If only the gallstones were removed, more stones will almost definitely re-form.  Also you will probably not be able to find a surgeon willing to do this as it is not the standard of care and could lead to a variety of serious problems.  A lot of gallstones are very small and gravel or sand like and it would be difficult to remove all of them.  Also, if they were broken up and passed through the bile duct into the intestines, this would create a rather dangerous situation where the patient might develop pancreatitis or a blocked bile duct.  Treatment of gallstones is very different from kidney stones and will require gallbladder stone surgery.

Can I Have Gallbladder Pain Without Gallstone Problems?

There is also a gallbladder disease called biliary dyskinesia where there are no gallstones present but the gallbladder does not function properly.  The symptoms are similar to those for patients with gallstones.  A HIDA (hepatobiliary iminodiacetic acid) scan is usually done to test for this.  During this test, dye is taken up by the liver and excreted into the bile duct and flows into the gallbladder as well.  Another medication called CCK or else Ensure is then given which causes the gallbladder to contract and the percentage of dye that is ejected from the gallbladder is calculated.  If this percentage is 35% or less, the test suggests biliary dyskinesia, and Dr. Harris generally recommends getting relief of your symptoms with laparoscopic cholecystectomy (gallbladder removal surgery).

What Should I Eat After Gallbladder Surgery?

In order to reduce the risk of stomach upset such as nausea, vomiting, and diarrhea, Dr. Harris (gallbladder specialist) recommends a bland diet for the first week after surgery.  Avoid the types of foods that typically cause gallbladder attacks such as rich, creamy, fatty, or spicy foods.  Stick with bland foods like breads, fruits, vegetables, and meats which are lower in fat such as chicken breasts.  But regardless of what you eat, you are not going to do any permanent damage.

What are the Side Effects of Not Having a Gallbladder?

A small percentage of patients will have problems with diarrhea after cholecystectomy.  If the diarrhea remains problematic after a few weeks, we recommend trying Imodium.  If this doesn't improve things significantly, we prescribe a bile acid binding medication such as Colestipol.

What is a Cholecystectomy?

Can My Gallbladder Perforate?

This is extremely rare but yes it is possible.  A CT scan would be able to tell this and surgery would likely be needed to deal with this problem.

Is There a Blood Test for Gallstones?

No there is not a blood test that would definitely tell if you have gallstones but some blood tests might identify the possibility of gallstones such as an elevated bilirubin level to help you determine if you require gallbladder stone surgery.

Are There Medications I Can Take for Gallstones Instead of Having Surgery?

You could try a medication called Ursodiol but it is not very effective and most physicians, such as Dr. Harris, recommend surgery over this medication. You should talk with a gallbladder specialist about medication to take.

Why do Gallstones Form?

Gallstones form because of imbalance in the contents of bile which flows from the liver into the intestines.  Risk factors include obesity, a diet high in fat and low in fiber, rapid weight loss, being female, and taking estrogen containing medications.

How Long is Gallbladder Surgery Recovery?

Everyone is different but generally the first couple of days after surgery may be a bit rough.  Hopefully after that you can just take over the counter medications for discomfort and get back to most activity. 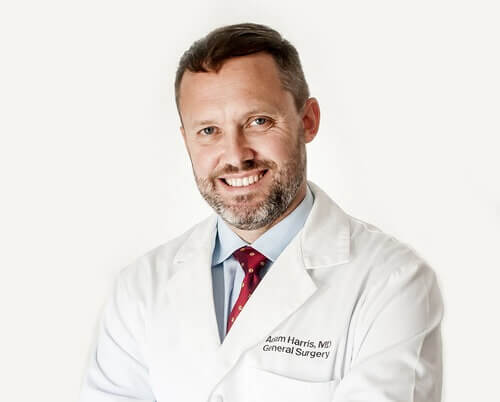 Contact Us To Learn How a Gallbladder Surgeon Can Help

We look forward to speaking with you soon.